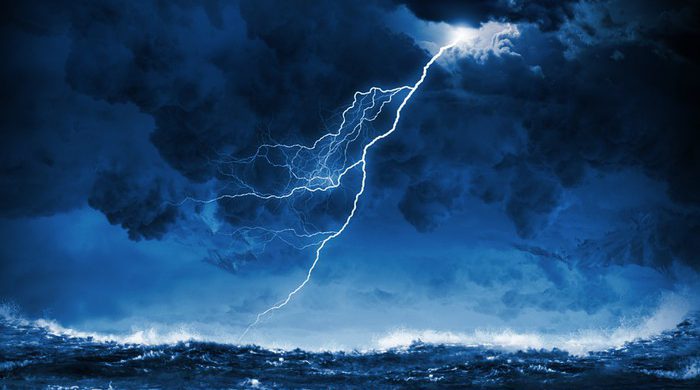 The wind speed increases, the waves getting Bigger, slamming into us more frequently. The sun sets, dark now. Big storm racing across the ocean, Theanna directly in its path. Its going to hit us any minute now. I brace myself. I begin to pray, so would you. It hit, like a steam roller. The first lightning bolts followed. Lighting up the sky and the cabin.

Its total day light for a second or two. Exploding thunder, follows the lightning flashes. The horrible fear of being struck by lightning any second. I hate it. Again I see then hear the sharp crackling of another lightning bolt. That one sounds way too close. Its thunder is instantaneous, deafening. Rattles my bones, shakes my brain. Its like giant flashbulbs going off in the cabin. Lightning is frighting. I’m terrified by the possibility of being hit by lightning. I hang on, ride it out, tossed around by huge waves. Theanna is bouncing and crashing all over the place. Electric veins shattering the black night electrocuting the sky. Its a dreadful feeling, my boats main mast is the tallest thing around. Its just begging for the lightning to strike it.
I try not to think about her masts, two lightning rods on deck. I hang on for dear life.

Meer laden… Volgen op Instagram
Please enter the Page ID of the Facebook feed you'd like to display. You can do this in either the Custom Facebook Feed plugin settings or in the shortcode itself. For example, [custom-facebook-feed id=YOUR_PAGE_ID_HERE].